MIDI connectors (IN, OUT) 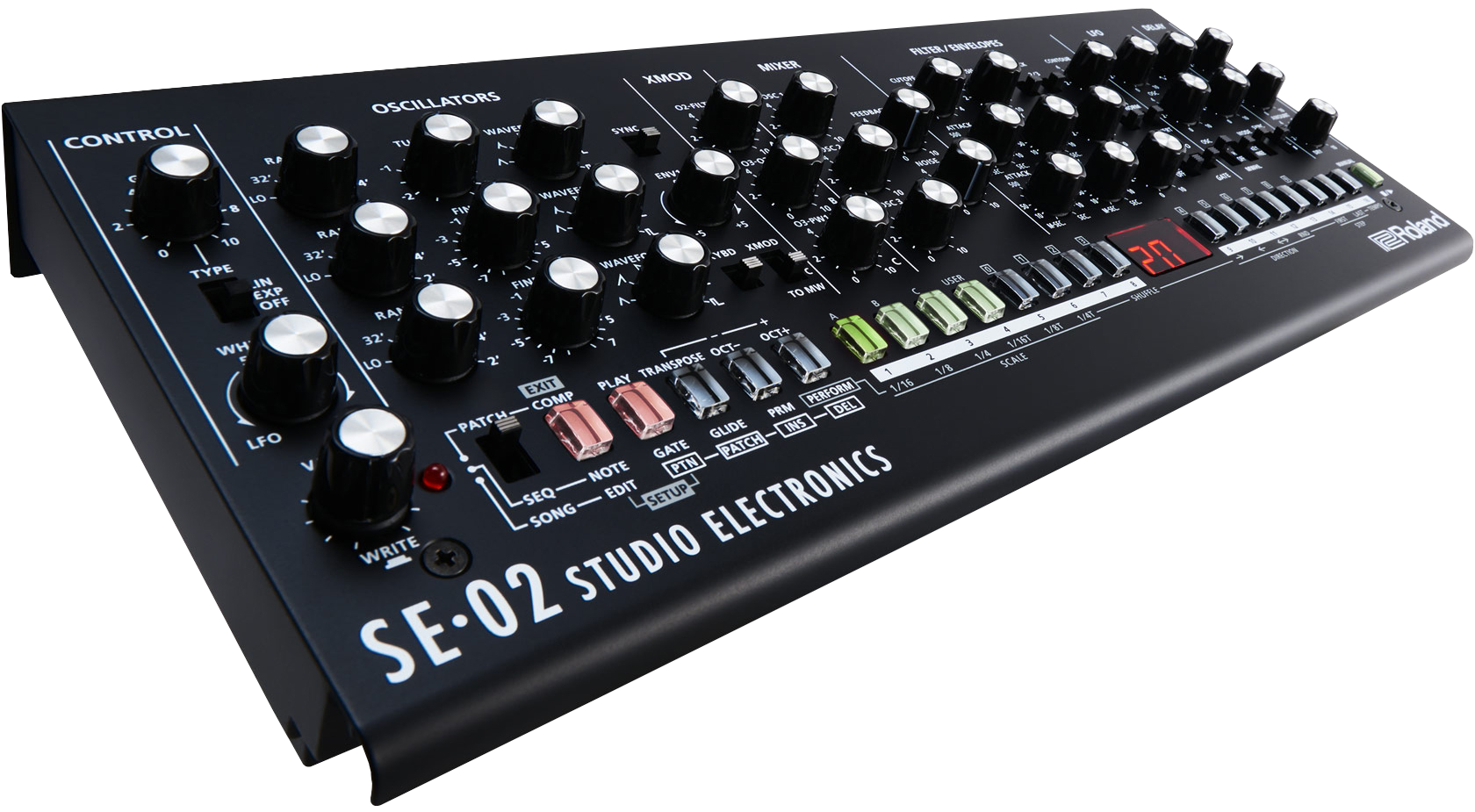 A glorious collaborative effort, the SE-02 uses authentic discrete analog circuitry to create a synthesizer with a distinctly vintage sound and vast programming options. With an array of high-quality knobs and switches and a uniquely creative onboard sequencer, the SE-02 delivers massive tone and texture with expressive hands-on control. 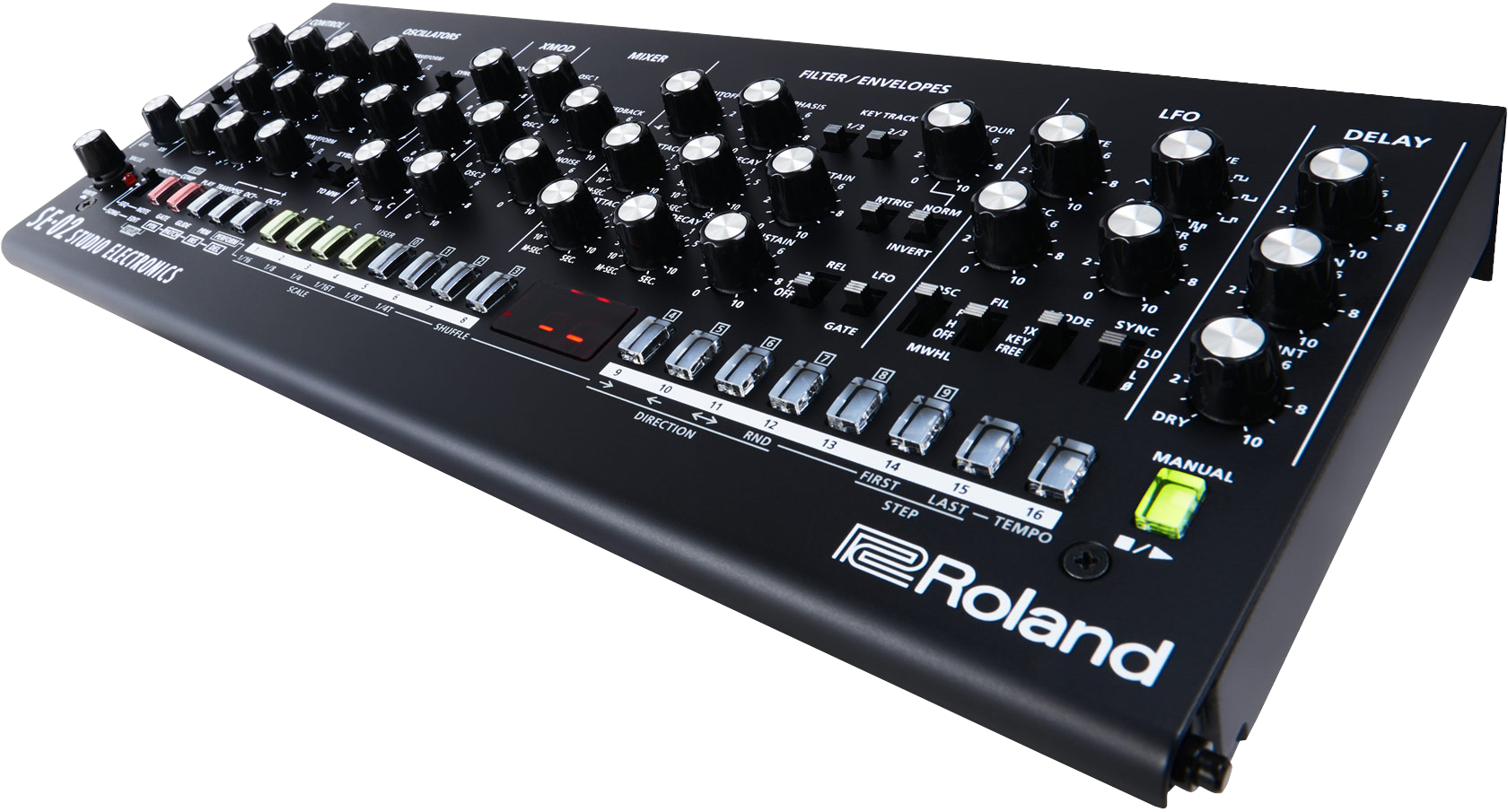 Mom (Maria) and dad (Val) St. Regis must be proud looking down on this partnership of genius, and love of Analog. It certainly wasn't yesterday when the surreal helicopter vibe Francis Ford Coppola wanted for "Apocalypse Now" was synthesized in part by Gary Leuenberger, on a massive Roland System 700 in the synth room of St. Regis & Leuenberger in downtown San Francisco (727 Market if you must know). Mr. C. was in attendance, and jonesing for joe (the morning kind), began joking around with our Italian American mother about making her an offer she couldn't refuse, if she didn't play nice-nice as a hostess. Ah, the fantastic 70s. Hey that's an MSR SE-1 lead patch...

You bump into an old friend at a trade show (Scott Tibbs—The Professor, the 10 year dreamer) and there is this instant vision thing and "The Project" has legs before anyone realizes its... shape.


Next thing you know you are in a meeting with Ace and co. in the inner Roland sanctum at NAMM, well above the fray and fury—staring open-mouthed, at the 1st prototype, you thought was possible (we can squeeze Tim's genius in there!) when the same Roland maji seemed to float just inside the doorway of the SE shop, almost too impatient and hyped to speak, let alone to unwrap the Boutique Series "examples" they smuggled across an ocean, just four or so months previously, to show us what they... saw, and knew would be an extraordinary fusion of creativity and... music. We had all met in El Segundo (Tim Caswell included) and tested the waters, before the bubble wrap reveal, a year or so before—wasn't the time, but as Charlie Parker once wrote and played sublimely, "Now's the Time." Our time is their time... we're harmonizing, to paraphrase another jazz standard. Could the entire Roland team have been more of a complete joy to work with? Ace, Scott Tibbs, Keigo Minamiya, Kenji Hirano, Igor Len, Christian Moraga, Marc Esquival, Shawn Bann, Oscar Gentel... Kudos and American-sized thanks. We think Mr. K. would be proud—is proud.

That sweetness of sound that is Roland (which still lives in my System 100M—no Hanz Zimmer doesn't own all of them), and ingenuity of digital integration, has reinvented our SE-1(X); the "Boutique Designer Series" gets it done with space-savvy smartness and slickness. Greg St. Regis' feature inventing, cramming, brilliance, stretches out the original's expressiveness; the snappy, reimagined Attack, Decay, Sustain envelope whips it all across your ears with a vintage vengance, especially when you crank the Feedback knob, and the immaculate DSP delay is holding court. Tim Caswell didn't copy and paste this one together: he sorted and sifted all of his ideas and designs to sympathize and synchronize the ultimate Studio Electronics/Roland hybrid monophonic analog synthesizer.

The SE-02 is the result of Scott Tibb's long-running campaign to get Roland to put an analog soundboard, designed by us, in one of their products. Since the Boutique series consists of models of older Roland products, it was decided to go outside and use the Model D as a familiar reference for the feature set and internal architecture.

I have been working with those circuits since the 80s, and was even offered the Moog name, copyrights and patents in 1978 by the then owner, EJE, for $20,000. I passed, since the patents were expired, and I didn't feel good about buying the name and slapping it on my own products. Shows what a mediocre businessman I am. After several years of modifying and rack mounting Minis, we decided to build our own idea of a monosynth in the early 90s. The SE-1 was based on the circuits of the Mini, but changed to add many features and allow midi control and saving of presets. We followed with the ATC-1 and the Omega, still based on many of the circuits, but introducing the idea of multiple classic filters.


The first prototype of the new soundboard was built thru hole, to make circuit tweaking easier, and to get a sound reference point. Then Roland, in consultation with us, converted it to surface mount. The result was beyond our expectations. The precision dual transistors available in surface mount packages eliminated the laborious hand matching that we do on our own products, and Roland's board layout was extremely quiet and stable. And 1/4 the size of the thru hole version.

So, the VCO: It has some Moog elements, some from Tom Oberheim, and some from ARP. It is our desire that it be very stable, yet not to the point of sterility. It's sort of a greatest hits of 70s analog technology. Starting with the Omega, I developed a computer based tuning routine similar to that used in the great polysynths of the 70s and 80s. When the soundboard gets a Tune request from the main cpu, it measures the frequencies of the 3 oscillators at 9 different points and computes correction voltages to make those frequencies exact. The results are stored in the soundboard cpu's eprom, for instant access on power up. (Anybody remember how long it took a Prophet 5 to tune when powered up?) When it's time to play a note, (500 times/second), the cpu interpolates between correction points to get a control voltage that will play the right note. Notes above and below the measured points are derived by linear extension from the last 2 points.

The VCF is the classic ladder filter. There are a few stability improvements, but after some trial and error with the SE-1, we have learned to leave in the "good" funk and minimize the bad. One thing we have done since the start is optimize the signal level thru the VCF and VCA. If the Mix controls are all the way up, the signal level will be a good deal hotter than in the Model D. This adds warmth and aggression, but if that's not enough, the Feedback circuit we developed for our Boomstar is included. The VCA is right out of the Model D. We have used different VCA circuits in all of our products, but that one has a very distinct character. (and overdrives very nicely). The surface mount dual transistors shine here.

Envelopes - OK, I know I'll get some flack here, but listen with an open mind. I went back to my Model D, and measured times at every dial marking, and took many, many digital storage scope pictures of the envelopes at all settings. The PIC24 chip I use now is far faster and more powerful than the one in our older products, so it has enabled a much more accurate model of the envelopes than before. The update rate is 2ms, so fastest time is the same as the Model D (attack and decay together). Extensive tweaking of the analog circuits that turn the numbers into a voltage has resulted in a noticeable improvement over my previous efforts. If you're still not satisfied, by all means buy a Model D. They are wonderful, and everyone should have one. I'm keeping mine. Glide is an analog/digital hybrid. The speed of the PIC, and the 5 times faster update rate than before make it very smooth. My preferred shape is exponential, like the Model 55, but the linear response of the Model D is included also. I guess I like them both.

One of our additions to the "classic" feature set is Xmod. It allows OSC 3 to modulate the pulse widths of OSC1 & 2, OSC2 to modulate the VCF, and OSC3 to modulate OSC2 (yeah, I know the Mini can do some of that). There are preset amount controls for each of these, and in addition, the WheelMix control. That enables the mod wheel to control a mix of the LFO and one of the Xmods. Try it, it's fun. The LFO is taken from our Boomstar, but with keytrigger and 1 shot modes added. Of course it will sync to midi. The purity of the LFO waves is far better than before, due to the PIC's speed and 5 times faster update rate. I won't go into all the other details of the SE-02, other than to say it was an immense pleasure to work with Keigo and the other folks at Roland. They have crammed an incredible number of features and functions into this little box, and sell it at a price that we couldn't even build it for.

P.S. When I say "I", that's me in my shop. When I say "we" or "our", that adds Greg St. Regis (the principal architect of the SE-02), his brother Marc, Scott Tibbs, and a few other people we trust—plus the wizards at Roland, led by Keigo Minamiya; this was certainly a team effort.
P.P.S. To those who are crying DCO because of the auto-tune calibration routine (which once run is not in control of anything): The SE-02 features true analog VCOs, same as our Minimidi, SE-1(X), ATC-1(X, Xi) Omega/CODE 8, Boomstar Modular Oscillation and SlimO, and Tonestar 8106 & 2600 synth voices. Tuning routine computes correction values that are added or subtracted from the oscillator CV to make them play in tune. So yes, they are true VCOs with an analog comparator, not a counter. The giveaway is the Xmod - that doesn't happen with DCOs. It can be done with full-on digital oscillators, but Roland wouldn't need us to do it that way. 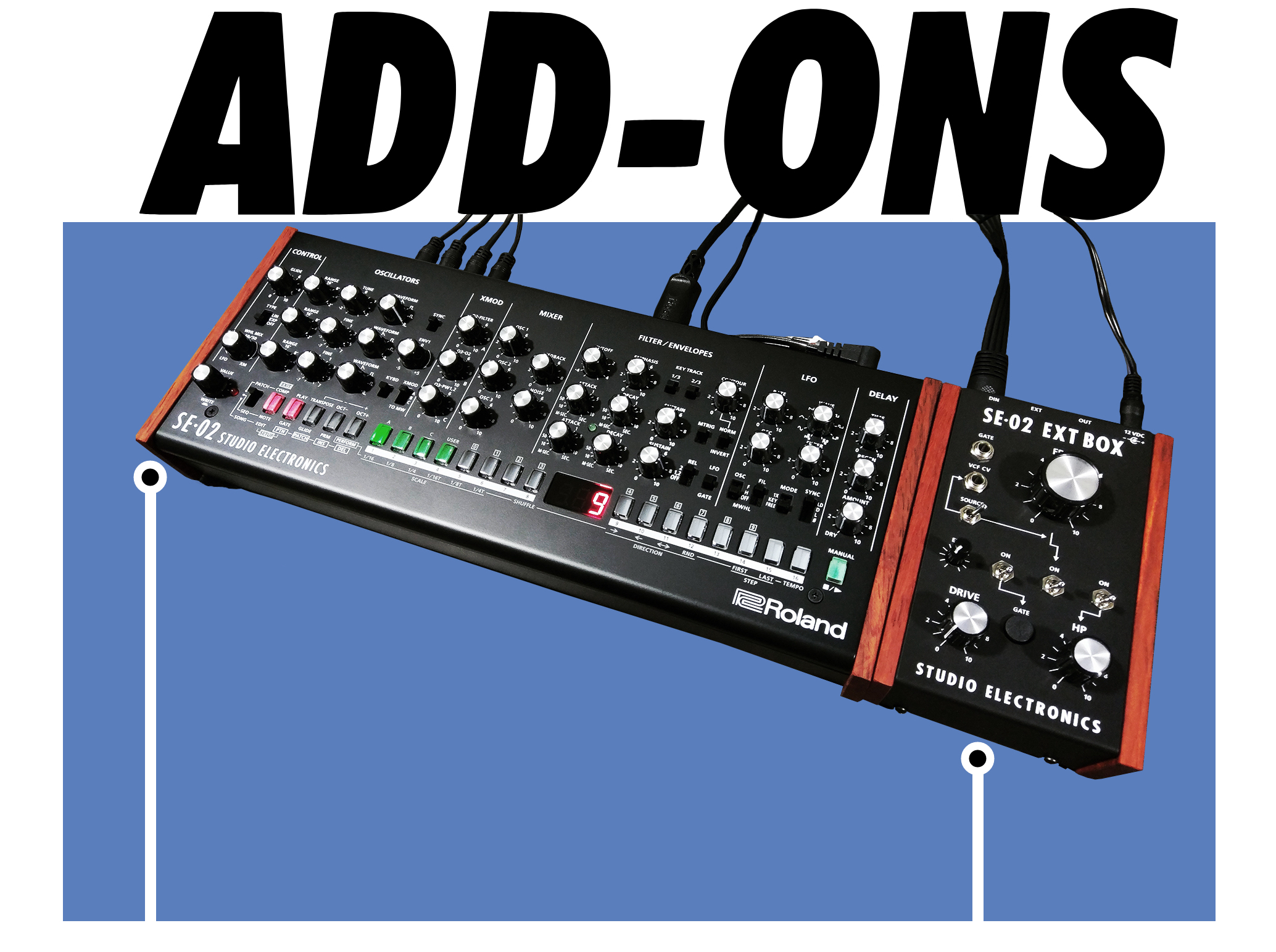 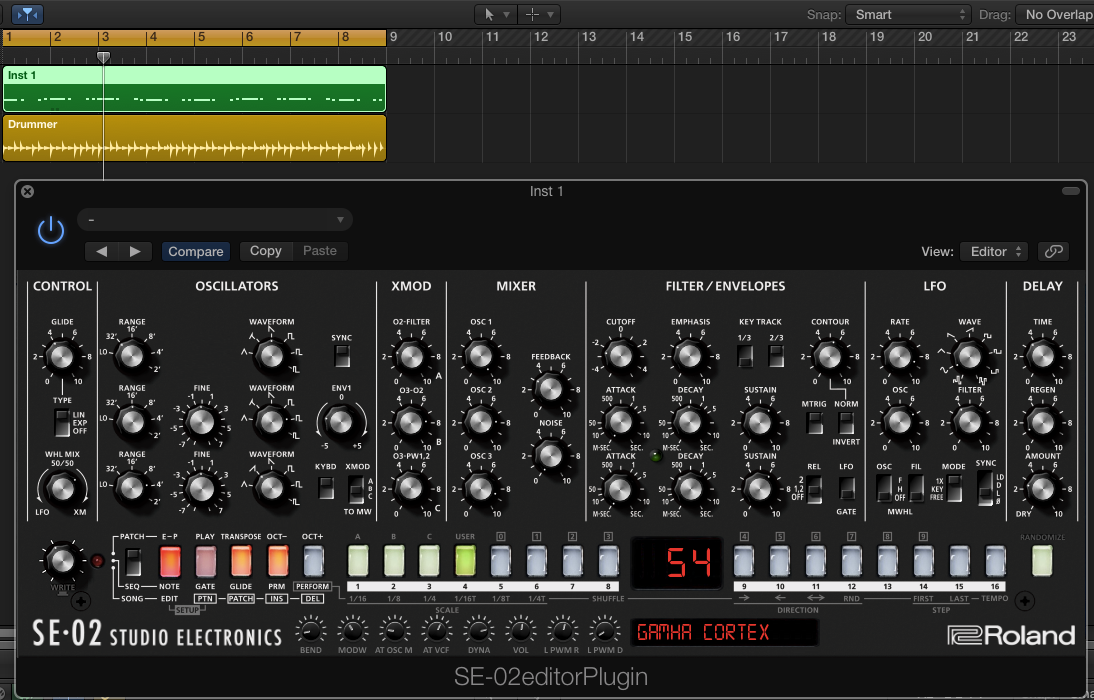 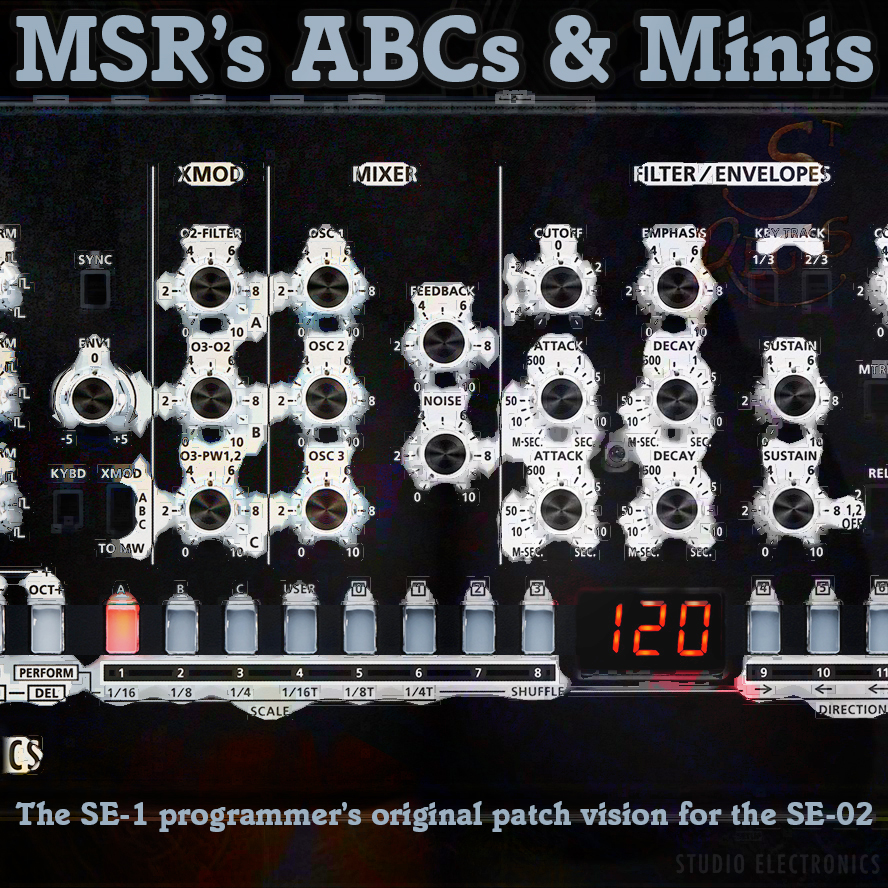